It’s no secret that I’ve been making a career of sorts from trying to balance my love of medieval literature and literature in general with my love of popular culture, particular the television shows created by Joss Whedon. So I think TV is good, right?

Wrong—no more than just because I love to read and teach literature I think “books” are good. Some books are poorly written and a chore to read. Some books are not meant for very young persons. Some books have poisonous content and I wonder why they exist at all, but Milton pretty much explains it all in Areopagitica.

As for TV, without people who can read and write, TV dramas and comedies, even “reality” shows, wouldn’t exist. And the best ones are created and written by people who have read good literature, not by those who have done nothing but watch movies and TV: Joss Whedon, a great lover of Shakespeare; Jane Espenson (MA in linguistics); David Milch, David Simon, David E. Kelley (what’s with all the Davids?); J.J. Abrams, Aaron Sorkin (BFA Musical Theater, playwright); J. Michael Straczynski, Barbara Hall, Glen Gordon Caron.

Nevertheless, a more and more scientific studies are suggesting, TV is not for very young children, especially if we want them to learn to read and use language as skilfully as they should:

[T]he American Academy of Pediatrics discourages television watching before the age of 2, a time when critical development, such as language acquisition, occurs. …

To figure out the TV-language link, Christakis and his colleagues rounded up 329 2-month to 4-year-old children and their parents. The kids wore digital devices on random days each month for up to two years that recorded everything they heard or said for 12 to 16 hours. …

Analyses of the recordings revealed that each hour of additional television exposure was linked with a decrease of 770 words (7 percent) the child heard from an adult during the recording session. Hours of television were also associated with a decrease in the number and length of child vocalizations and the back and forth between the child and an adult (called a conversational turn).

“Some of these reductions are likely due to children being left alone in front of the television screen,” the researchers write in the June issue of the journal Archives of Pediatrics & Adolescent Medicine, “but others likely reflect situations in which adults, though present, are distracted by the screen and not interacting with their infant in a discernible manner.”

So watching TV—not even Sesame Street or “Baby Einstein” vids—is not helpful for babies’ language development, and it’s probably not helpful for their parents to be watching TV instead of talking to the babies. I guess we could have figured that out, really.

After we’ve grown up, learned to read and think about things, we can have much more fun with Buffy, Babylon 5, and The Wire.

My early Christmas present arrived a couple days ago in a box from McFarland Publishing with authors’ copies of Buffy Goes Dark, the anthology of essays on seasons 6 and 7 of Buffy the Vampire Slayer that I co-edited with Lynne Y. Edwards of Ursinus College and James B. South of Marquette University: 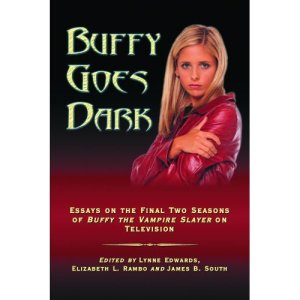 We could not be happier with this cover, by the way!

Although the “official” publication date is 2009, the book is apparently on sale now, so if you were kind or enthusiastic enough to pre-order it, perhaps from Amazon.com, it should arrive soon.

Thanks again to the contributors, and to all who made Buffy worth writing about—especially Marti Noxon and Jane Espenson, who have essays dedicated to their contributions (by David Perry and David Kociemba) in the book, and of course, Joss Whedon, sine qua non!

One of my favorite [TV] writers, Jane Espenson, writes about why she writes. Jane rules. I have no aspirations to be a television writer, but I still enjoy the way Espenson writes about it—as well as the actual TV shows and episodes she has helped create. In much the same way, I have no ambition to become a surgeon (as if!—besides, enough of my relatives have already taken up that career, and they know I admire them), but I greatly appreciate Richard Selzer’s essays on his work as a physician.